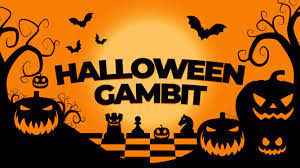 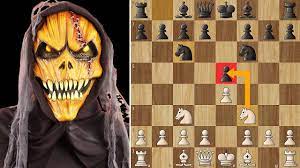 Did you know that the holiday has a chess gambit named after it? Unlike the Queen’s Gambit, popularized by the world famous Netflix series, which isn’t truly a gambit (white can win back the pawn by force if he chooses to) , in the Halloween gambit, you sacrifice a full knight! In exchange for giving up the knight on e5, white gains a strong center and quick initiative.

One should note the Halloweeen Gambit is not exactly sound; his compensation for playing 4. Nxe5 is insufficient as the evaluation goes +.2 (very slight advantage) to -1.2 (losing). However, it can be a good surprise weapon. Check out a blitz game our 230th Podcast Guest Maxim Vachier- Lagrave, World Blitz Champion and Seventh-Highest Rated Player in History won a few years ago with it:

Gambits like the Haloween Gambit and the Latvian Gambit could be very tricky to play against; some are more sound then others. My former coach Alan Kantor, our 88th podcast guest, taught me several of them, including the Goring Gambit and the Kings Gambit. What gambits have you had success with?

4 thoughts on “The Halloween Gambit”