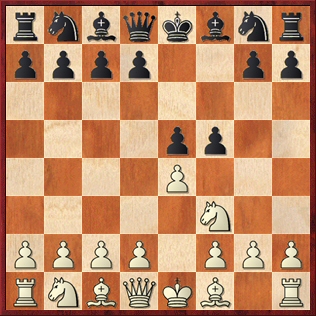 I was thinking about the Latvian Gambit recently.  I used to play it regularly and had good success against higher rated players.  Unfortunately it didn’t seem to work so well against lower rated players.

I think the problem for higher rated players was that they knew a little about it, but not as much as me.  So they would play the most aggressive moves for a while, but wouldn’t know how to follow up.  On the other hand, lower rated players just played natural moves and got a good position.  Eventually I gave up on it.

But, if you haven’t ever tried it, you will find it a fun opening.  It is worth trying, especially against higher rated players.  But first you have to have some idea of what you are doing.

The Latvian Gambit starts with 1. e4 e5, 2. Nf3 f5!?.  It is questionable whether the Latvian is really sound.  You don’t see Grandmasters playing it, but it is popular among many amateurs with an adventurous spirit, or who just want to take their opponent out of “normal” lines.  It is also popular in correspondence play.  The main strategic idea for Black is to plant pawns on d5 and e4, then use his dominating center and open lines to stifle White’s play and launch an eventual counter attack.  Black will frequently give up his g and h pawns or even his rook on h8 to lure White into wasting valuable time.  White’s strategy is to either prevent or undermine Black’s center and exploit the weakening of Black’s king side.  If White doesn’t get too caught up in trying to punish Black by winning material, he gets the better game.  But if White isn’t careful, he can often find himself blown away before he knows what hit him.

The intent of this primer is to give the non-Latvian player a brief over view.  I have borrowed heavily from five sources:

Keep in mind that this is just an over view.  There are oodles (a technical term) of interesting side variations for both sides.  Let your imagination run wild!

1. e4 e5 2. Nf3 f5!? Black aggressively fights for the center, but is it worth weakening the kingside?  This is played about 10 times more frequently in correspondence chess than in over the board chess.  I guess correspondence players are more daring.

<At move 3 White has several choices. 3. Nxe5 This is the main line and White’s only serious attempt at refuting the Latvian.  The defense is unquestionably difficult, but Black has resources.  In spite of extensive analysis over the last century, no refutation is in sight.  But first, let’s look at the alternatives for White.

3… Qf6 Certainly unorthodox, but it serves well both defensively (preventing 4. Qh5+) and offensively (attacks the knight).  The down side is it takes away the best square for the king knight and the Queen may be exposed to attack.  There are two main continuations.

4. Nc4 White retains the option of playing the d-pawn to d3.  This is the line that tests Black most severely.

4… fxe4 5. Nc3 This is the key position in the current theory of the Latvian.  There are four commonly played answers by Black. 5… Qf7 This is currently considered to be Black’s best try, but it is still not quite sufficient.

I note that there is no record of the Latvian Gambit being played by a World Champion.  However, there are three games known where it was played against a future World Champion – two against Jose Raul Capablanca and one against Bobby Fischer.  Capablanca split his two games and Fischer lost.

If you want to give the Latvian Gambit a try, I’ll see you in the proverbial trenches!