This afternoon I was on the phone with real estate broker Shane Mehigan and I mentioned I played a tournament in New Jersey over Presidents Day Weekend. He asked me if I win money playing in tournaments. I laughed as I told him its funny he asked; the United States Amateur Team East is one of the few tournaments adults will play in that do not have cash prizes. Year after year, grandmasters, including Leonid Yudasin, John Fedorowicz, and Magesh Panchanathan and beginners alike will compete in the 350-team national tournament for nothing but glory and camaraderie. This past tournament, Chief Director Steve Doyle provided cake and coffee to commemorate its 50thanniversary. Since 2003, I played in all but two events, since the first time I played with Grandmaster Michael Rohde, Kevin Murphy and Aaron Rohde.

My few first years, I formed uncompetitive teams with whatever friends I could scrounge together. In 2007, my team Beavis Butvinik, made up of Fide Master James Critelli, NM Evan Turtel, Nick Panico, Alan Kantor and I, won 1stplace in the whole tournament. We made it on the cover of Chess Life in May 2007 and earned the right to compete in the playoffs between the winners of the East, West, North and South tournaments.

While I am a regular at the East tournament, I am going out of my comfort zone as this Thursday I am traveling to Raleigh, NC to compete in my first Amateur Team South with my team “Their Ain’t No Wall Between the South and North”:

These are the three things I love most about the USATE:

There are all types of teams, ranging from teams of 4 scholastic players, coaches and students, senior citizens, etc. Every year there are tons of teams that seemingly impossibly go right around the magic 2199.5 number, the highest possible average rating.  Balanced teams typically win; check out Princeton University, who won the tournament 3 out of the last five years… the university didn’t have any players above 2400 in any of the years. This year and last, I decided to bow out of forming the most competitive team possible and play with friends and do some joint marketing with other chess companies.

Many chess players will play this tournament and no others throughout the year. It’s a great way to catch up with folks.

After cake was served before Round 2, Steve Doyle asked, “In what other tournament, do you get free cake and entertainment?”: Before each round, Steve ask trivia questions and the winners receive gifts, donated by various vendor, including American Chess Equipment, Russell Enterprises and as of this year, Premier Chess.

On Sunday night, before round 4, is always the team name competition. The audience has fun as Steve Doyle lists out his list of favorite names and it votes by show of noise. While my team this year, made up of Jesse Lozano of Complete Chess, yours truly, Bob Holliman, and Shelby Lohrman of American Chess Equipment, didn’t win a place prize, we did win Best Team Name with “Caruana Virus.” I first met Fabiano Caruana when he was eight-years-old in a Marshall Chess Club Friday Night Rapids tournament.

After the team name competition, everyone votes on the best gimmick via level of applause. This year, the winner was the “King Coffee Quartet”. Second place was “The Pawn Shop”, led by Igor N Khmelnitsky.

Check out my first-round victory from this year’s tournament against Matthew Grasso here:

I look forward to reporting to all our loyal readers about my first Amateur Team South this weekend, when I’ll be able to share how how the level of competition, fun and camaraderie compares to the Amateur Team East!

Hello Premier Chess fans. I am excited to announce, thanks to inspiration from Adam Shuty, owner of Atomic Total Fitness ,I started a brand new podcast. Check out the recent episode of Adam’s podcast that I was on here.

On podcast, I will have frequent guests and discuss chess strategy and business and life applications of the game.

1) Introduction to I, Evan Rabin, CEO of Premier Chess and the company

2)Interview with Michael Deutsch, owner of Hands on Hopps Skills 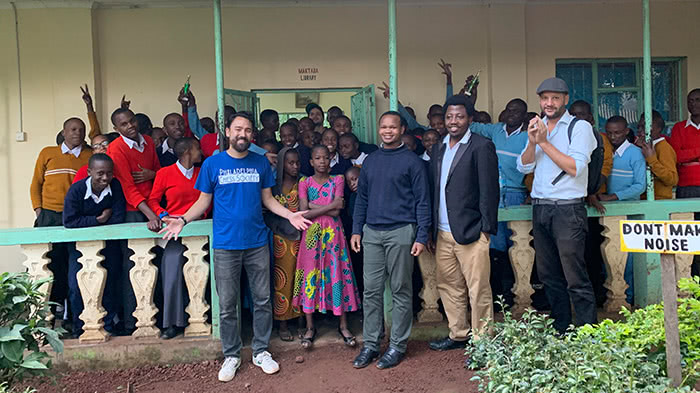 END_OF_DOCUMENT_TOKEN_TO_BE_REPLACED

I was thinking about the Latvian Gambit recently.  I used to play it regularly and had good success against higher rated players.  Unfortunately it didn’t seem to work so well against lower rated players.

I think the problem for higher rated players was that they knew a little about it, but not as much as me.  So they would play the most aggressive moves for a while, but wouldn’t know how to follow up.  On the other hand, lower rated players just played natural moves and got a good position.  Eventually I gave up on it.

But, if you haven’t ever tried it, you will find it a fun opening.  It is worth trying, especially against higher rated players.  But first you have to have some idea of what you are doing.

The Latvian Gambit starts with 1. e4 e5, 2. Nf3 f5!?.  It is questionable whether the Latvian is really sound.  You don’t see Grandmasters playing it, but it is popular among many amateurs with an adventurous spirit, or who just want to take their opponent out of “normal” lines.  It is also popular in correspondence play.  The main strategic idea for Black is to plant pawns on d5 and e4, then use his dominating center and open lines to stifle White’s play and launch an eventual counter attack.  Black will frequently give up his g and h pawns or even his rook on h8 to lure White into wasting valuable time.  White’s strategy is to either prevent or undermine Black’s center and exploit the weakening of Black’s king side.  If White doesn’t get too caught up in trying to punish Black by winning material, he gets the better game.  But if White isn’t careful, he can often find himself blown away before he knows what hit him.

The intent of this primer is to give the non-Latvian player a brief over view.  I have borrowed heavily from five sources:

Keep in mind that this is just an over view.  There are oodles (a technical term) of interesting side variations for both sides.  Let your imagination run wild!

1. e4 e5 2. Nf3 f5!? Black aggressively fights for the center, but is it worth weakening the kingside?  This is played about 10 times more frequently in correspondence chess than in over the board chess.  I guess correspondence players are more daring.

<At move 3 White has several choices. 3. Nxe5 This is the main line and White’s only serious attempt at refuting the Latvian.  The defense is unquestionably difficult, but Black has resources.  In spite of extensive analysis over the last century, no refutation is in sight.  But first, let’s look at the alternatives for White.

3… Qf6 Certainly unorthodox, but it serves well both defensively (preventing 4. Qh5+) and offensively (attacks the knight).  The down side is it takes away the best square for the king knight and the Queen may be exposed to attack.  There are two main continuations.

4. Nc4 White retains the option of playing the d-pawn to d3.  This is the line that tests Black most severely.

4… fxe4 5. Nc3 This is the key position in the current theory of the Latvian.  There are four commonly played answers by Black. 5… Qf7 This is currently considered to be Black’s best try, but it is still not quite sufficient.

I note that there is no record of the Latvian Gambit being played by a World Champion.  However, there are three games known where it was played against a future World Champion – two against Jose Raul Capablanca and one against Bobby Fischer.  Capablanca split his two games and Fischer lost.

If you want to give the Latvian Gambit a try, I’ll see you in the proverbial trenches!