The way the players see the chess board and predict future moves is the essence of the game. Every move is important, whether it is in the early, middle, or end game.

In previous years, I have become familiar with chess. I know each piece; how and where they can move. I thought I knew which pieces held the most significance and which ones I would be able to “sacrifice.” However, learning chess in-depth with Premier Chess has allowed me to rethink my game and strategize in different ways.

Over the course of the last week, I learned focus points. I learned the importance of controlling the center, as well as powerful moves like castling, to improve my game.

Controlling the center is important as it allows you to have more control over the game. If a player is able to move their pieces to more squares on the board, then that player “controls” the game. Thus, taking control of the center in the beginning of the game is very important. 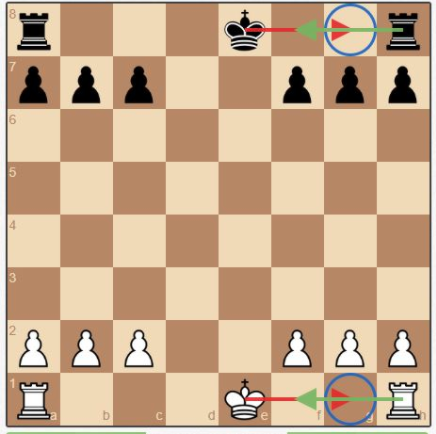 Additionally, I thought that kings were only able to move only one square. However, I was quickly taught that there is one exception to the king’s movement, castling. Castling is a unique move in chess. The king and rook must be in their original positions on the board and they must not have made any moves prior. There may not be any pieces between the king and the rook. Move the king two squares closer to the rook. Then take the rook and place it on the other side of the king as shown in the image. At first, I thought castling was cool, but did not really see the meaning of using a turn to do that. As I started to play more, I realized that castling allows the king to be protected and not remain in a vulnerable position.

These few points taught me the significance of looking ahead and trying to predict my opponent’s moves. Castling and focusing on the center really gave me starting points to improve my game and strengthen my tactics.

While I am not a Chess Master, and am only an intern who is a beginner-intermediate chess player, I believe if one simply focuses on a few moves, they can really enhance their game.