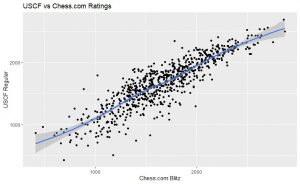 A few years ago, I had an adult private student who was unrated and was about to play his first tournament, The Manhattan Open. He was rated 1600 on Chess.com and asked me if he should play in the U-1600 section or the U-1400 section. I surprised him when I responded he should play in the U-1200 and he said that would be way too easy. I explained to him how his Chess.com rating would have nothing to do with his Over-the-Board strength. He did play the U-1200 section and finished with a mediocre 2.5/5 score.

When we first started our virtual classes in March 2020,

I sat in one of our after-school clubs and saw many of the students were 1600-1800+ and was confused. 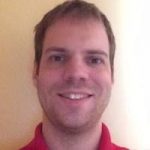 Our Director of Virtual Programs Brian Wilmeth laughed as he explained to me that on Lichess, ratings start at 1600. Since they were playing a closed tournament, of course someone would automatically go higher, and some would good down.

To the contrary, with Over-The Board ratings (US Chess or FIDE (international), one does not start at an arbitrary number i.e., 1600, or 0. To the contrary, his performance rating will be his first provisional rating. For instance, Jerry plays in his first US Chess rated tournament. He plays 4 players rated 1600 and wins two games and loses two. Since he scored 50%, his provisional rating will be 1600. Until he plays 28 games, it will remain provisional.

Provisional ratings are official and do count toward section limits and prizes; they just can go up and down more quickly. As one’s rating goes up, his K-factor goes down, which means the more one’s rating goes up, the less it can fluctuate. Therefore, the difference fffxdfft5nof a 100 rated player (minimum rating) and a 200 rated player is substantially greater than the difference of a 2700 super grandmaster and a 2600 grandmaster, who is either teaching chess for an income or professionally doing something out of the chess world.

Nowadays there is an even bigger gap between online ratings and over-the-board strength as with COVID-19, there are many experienced players that have played little to no chess. I was shocked a few weeks ago when I taught a private lesson to a young adult, who was approximately 1200 USCF strength but has neither played a single over-the-board game nor taken an in-person lesson. At the elite level, lots of prodigies, including the world-famous Hans Niemann, our 148th Podcast Guest Grandmaster Christopher Yoo and the Olympiad legend Nodirbek Abdusattorov have skyrocketed their ratings in the last two years.

Online chess continues to be a great tool; I told one one of our school programs the other day that each kid should have a Lichess, Chesskid or Chess.com account so that they could practice doing puzzles or play throughout the week. However, just because one is 2200 on Chess.com in Crazyhouse, Bullet, Blitz or Rapid, or even classical it does not mean he is a master. If one wants to measure his skill level, he needs to get out and play in tournaments and see what his real strength is.

5 thoughts on “Chess Ratings: Online vs Over-The Board  ”