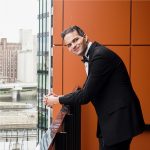 Capture, attack and pressure are words that beginners often use interchangably but mean different things. Each words relates to creating complications for one’s opponent but they are not synonymous. Let’s discuss the nuances: 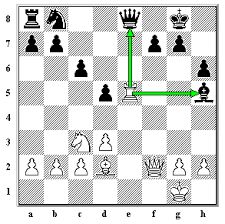 means the act of taking one’s opponent’s piece, which is symbolized by an “x”. For instance in this position, white has five possible captures:

Of course, three of those moves get question marks as black could take something back of much more value. Rxh5 would be a good capture but Rxe8+ is by far the best.

Attack means one has an immiment threat of capturing a piece. To notice attacks is the main reason “If my opponent has another move, what would it be?” is one of three questions one should ask everytime his opponent makes a move. 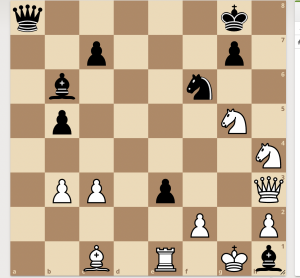 For instance, in this postion, Matthew Coy just played e3, attacking my white pawn on f2. If it was his turn again, he would certainly play exf2+, not only winning a pawn but creating a double attack on my king and rook. I played Bxe3, which did lead to a win; however, of course I missed a simple mate in 2:

Pressure refers to eying a square or piece, without threatening to capture it. 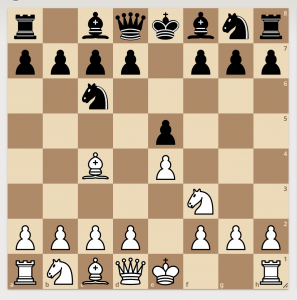 For instance, in the Giuoco Piano, white’s bishop on c4 is putting pressure on the ‘weak’ f7 pawn but is not attacking it. If it was white’s turn again, he would not play Bxf7+. While he would force black to expose his king by playing Kxf7, the lost bishop would not compensate for black’s slightly exposed king.