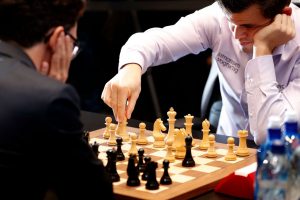 It has been 3 years since I have played OTB chess in a tournament setting. I am rated around 1500 USCF. This Saturday I will be playing in a quads format. Will I feel nervous? Probably, it is somewhat nerve-wracking as performing in a competitive setting requires lots of concentration. Despite not playing for three years, I have been keeping up with top-level chess tournaments with Daniel King/PowerPlayChess and Levy Rozman/GothamChess on youtube. My positional understanding has probably improved after watching the games of the best players, but never practicing has dulled my opening prep and calculation skills. My calculation skills were exceptionally rusty to the point where I missed simple two-move tactics. I fixed this quickly and easily by doing incredibly easy puzzles until I got 20 in a row and did slightly more difficult puzzles after each milestone. Tactics will definitely be the most important thing I study as even if I forget my preparation or don’t know the moves beyond a certain point, I need to be able to do blunder checks and tactical shots. I had to brush up on my opening prep which includes reviewing the most common lines of every d4+c4 opening. The Sveshnikov against E4, and the King’s Indian Defense for D4/C4. I will play a ton of games online to practice. Hopefully, I do well in this tournament and a 50% score would be a success for me.