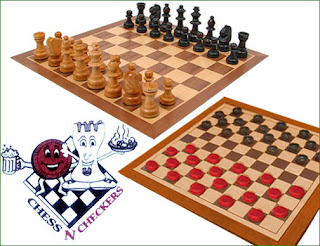 Chess, as I’m sure you all know, is a two player board game a played on a 64 square board, 8 squares on each side, and each players starts with 16 pieces. Checkers is also  a two players board game played on a 64 square board, 8 square on each side, but this time each players begins with 12 pieces, or checkers.

The objective in both of these games are different- in checkers, you need to capture all your opponents pieces until you leave them with no available moves. To the contrary, in chess, capturing pieces you a competitive advantage but you ultimately need to checkmate your opponent’s king to win. Checkmate means the king is in danger and there are no legal moves.

The other main difference between these two games is that in chess, each piece has it’s own unique move or function, leaving a larger margin for error than checkers, in which the pieces have all the same function unless you are able to move one of your checkers all the way across the board, turning it into a “King”, allowing it to move backwards. Similarly though, in chess, when a pawn reaches the other side of the board, it can promote to a Queen, Bishop, Rook or Knight. 99% of time players will promote to a queen but there a few times when a player will underpromote.

So to answer the question above, what came first, chess or checkers, the answer isn’t chess. The earliest version of chess, called Chaturanga, originated from Northern India around the start of the 6th century. Even though it was not until the 15th century that the game of chess evolved to what it is today. Checkers, however, is much older than chess. Historians believe that the earliest form of checkers was discovered in Iraq and archeologists have used Carbon dating to trace their findings back to 3000 B.C , over 5000+ years ago, whereas was only discovered a 1500 years ago.

So there you have it, the answer to the question we’ve all been waiting for. Tune in soon for more chess-related trivia.