These were my favorite quotes from Tim Crother’s Queen of Katwe book. 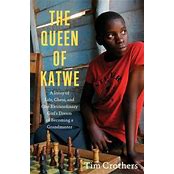 “Survival in Katwe depends on courage and determination as well as guile and luck.”

“Katwe’s youth endure an overwhelming stigma, a sense of defeat, and a resignation that they’ll never do any better than anybody else in the slum.”

“Soccer allowed Robert to dream.  It gave him joy.  It became his identity.”

“ ‘He didn’t ask for anything in exchange like other players who would ask me, ‘What will I get?’  What can I expect?’  Robert never thought he would get his daily bread from Miracle.’ “ (about Katende)

” ‘He was a young boy.  He needed shaping and guidance and direction.’ “ (about Katende)

“Katende had learned the game primarily through trial and error and the taught it that way to the Pioneers.”

“ ‘There was something special about Robert, a certain dignity and awareness that just stood out,’ Suddith says.”

” ‘I came to appreciate that chess is the best tool for kids in the slums,’ Katende says.  ‘I believe when they play the game they can integrate the principles used in the game into their daily life.  The moment your opponent makes a move, it is like posing a challenge to you, and the whole issue is to think, ‘What can I do to overcome this?’  It is like the challenges they face every day.  They must think how they can overcome those as well.  I told them they can never resign in a game, never give up until they are checkmated.  That is where the chessboard is like life.  That is the magic in the game.’ ”

“Whenever there was a crisis of confidence, Katende would tell his favorite story about an inept doctor.

‘Think of a situation when you are sick and you have gone to the clinic for treatment and a doctor comes up and says, ‘Young man, you’re sick.  I am going to inject you, but I don’t know whether I still remember how to inject.  Let me first see if I can remember.’  Then he gets a sponge and he tries to inject it and says, ‘I think I can remember.  Okay, let’s do the injection,’  Can you allow yourself to be injected?  Of course, you can’t.  Why?  Because the doctor does not believe in himself.  Then how do you entrust your life to him?  You cannot.  If you don’t believe in yourself, how do you expect anyone else to believe in you?’ “

” ‘Someday you will be able to read your opponent’s mind many moves in advance,’  Katende told them.  ‘You will see what is going to happen on the chessboard before it happens.  You are going to be prophets.’ “

“Harriet did not give up after her first business failure at the market, but tried again after learning from her mistakes.”

” ‘Then I watched them play the game and get happy and excited and I wanted a chance to be that happy.’ ” (Phiona)

“ ‘I learned that chess is a lot like my life,’ Phiona says.  ‘If you make smart moves you can stay away from danger, but you know any bad decision could be your last.’ “

“Chess began to make sense for Phiona.  It was a game of survival through considered aggression.  It is about finding some clarity among the confusion, some way to organize the chaos by always thinking several moves ahead of the danger.”

“Katende taught Phiona to understand the game, then to appreciate the game, and then finally to love the game.”

“Phiona looks at all the options and then makes the best move.”

“By that time, Phiona had embraced chess as her true calling.  ‘I love chess with all of my heart,’ Phiona says.  ‘And when you love something with all your heart, it brings many other things.’ “

“On his way home that night, Robert Katende believed he had seen the last of Phiona Mutesi.  ‘Because the day was so hard for her, for sure I did not expect to meet her again,’ Katende says.  ‘When she came back the next day, I knew she had an enduring kind of spirit.  I knew this girl had courage.’ “

“He explained about discipline and good behavior and seizing any opportunity that comes her way and using her past as motivation for her future.”

“ ‘Have you ever done something wrong because someone else has told you to do it without thinking?’ Katende asked her.  ‘Before you do something, always think, ‘What will be the repercussions?  What will be the consequences?’ “

Tips from Phiona for Chess (and Life):

“It is easy to play against those opponents you know you can beat.  But Coach has encouraged me to challenge myself and play as many games as I can against opponents who can beat me.  When I go and play against someone who I believe is better than me, I know my chess will get better that day.  I always learn something in a game when I am challenged.”

Don’t get too excited:

“I don’t ever get excited even when I’m in a winning position because I know that until the game is over I have to be really serious.  One time I was playing in an Olympiad game and during preparations we had gone over various openings, so when I went to play I played a good opening and I managed to take a free piece and I realized my position was much better than my opponent’s.  I got so excited because I thought I was going to win.  I ended up making a big blunder out of excitement and I lost a bishop.  I eventually managed to win the game, but it was a serious struggle to come back.  That day I learned that I can never get excited again until the game is over.”

“I have played in so many games when I was in a bad position and I felt like resigning, but I always remember that Coach has given us advice about never resigning until the game is over.  I hear those words in my head whenever my position seems hopeless and I just continue to endure and keep pushing myself.  I have seen many examples that a chess game is never over, no matter how bad your position may be, until you are mated.  You must continue to think.  You must continue to plot.  I have trained myself to believe that there is always a way out of trouble if I just continue thinking.”

“Once you have learned all the rules governing pieces, it is time to learn to strategize and to plan. You are trying to create teamwork with your pieces.  I encourage those I teach to be very patient in their planning.  You cannot just win a game, you have to plan for it.  I advise them not to always be in a hurry, but to first look at what the opponent has played and then try to read their mind.  What are they planning?  How can I stop that plan?  Then how can I attack?  How can I take control of the board?  When I first started playing, I wanted to capture a piece on every move.  One day I realized that you can win a chess game without capturing a single piece.  That’s when I realized that planning is more important than capturing.  The best way to avoid blunders is to play well.  Every game is different.  There are some games when I can never think more than one move ahead and there are others when I can plan beyond more than five moves ahead, but you must always be planning.”

“The only way to become good chess player is to work on your game every day, and I have found that it has helped me to have a dream.  In my heart, I love chess and part of that is because I am working toward a goal.  To be a big player in the game, I think you need to have a big dream,  because if your dream is only to beat your brother or your father, then when you achieve that dream, you will quit because you have achieved that goal.  My ultimate dream is to become a Grandmaster, and chasing that dream is what brings me back to the chessboard every day to try to become the first Grandmaster ever in my country.”

To learn more about Phiona Mutesi, listen to our CEO National Master Evan Rabin’s interview with her in our 148th podcast episode. 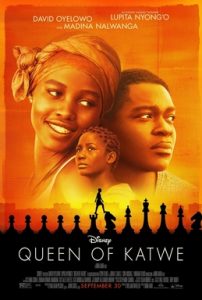 One Reply to “Queen of Katwe: A Collection of Quotes”