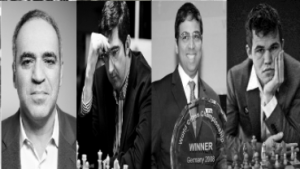 Perhaps it is unfair to include this game in this series since Kasparov’s opponent was a computer.  But make no mistake, Kasparov took the match against Deep Blue very seriously.  It is also one of the most famous games ever played.  It put to rest the question of whether or not a computer program could beat the best human players.  This is also one of just two cases where the shortest loss by a World Champion happened while he was World Champion.

Up to here this has been a solidly played game by both sides, but now Kramnik plays two bad moves in a row.

17… Qe4?! Since it is so obvious that you shouldn’t put your queen on the line of attack of your opponents pieces, I can only conclude that Kramnik miscalculated.

19… Qxc4 20. Re5 Kramnik has to lose either the knight or the light square bishop.  He chooses to resign instead.

This game was played in a minor tournament twenty years before Anand won the World Chess Championship, but even so he was already a strong player.  His opponent is a Columbian grandmaster.

5… Bf5? At least Anand was aware that his knight was under attack.  Unfortunately this move falls short.

Yes, even Carlsen has been known to have a bad day.