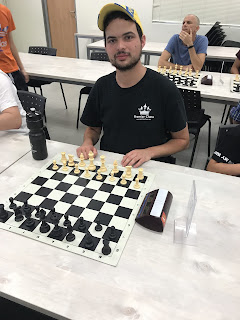 When I was walking with two Dutch sisters from my hostel in Eilat, Israel, the younger one asked me what non-chess players will often ask- “Is chess a sport?”. I told her there is no correct answer but that it is a mental sport as a day of playing chess can certainly exhaust you. On Saturday, August 18th, that was definitely the case as I played in a 40-game blitz marathon at the Kiryat Ono Chess Club.The time control was G/4 with a two second increment, which is standard for FIDE tournaments. Most blitz tournaments in the United States do not have a time delay, which makes flagging your opponent more likely. With the increment, one still needs to move fairly quickly but generally manage to win if he has an easily winning position. 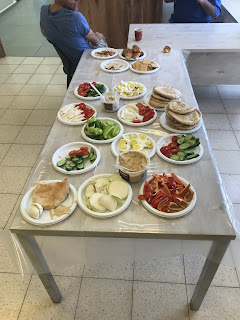 While a relatively low percentage of the entry fees were given back in prizes, the organizer Oded was welcoming and great at catering to the player’s needs. Getting to the tournament was difficult as Israel’s busses do not run on Shabbat. Karat Ono is located 20 minutes Northeast of Tel Aviv. Oded helped me find a way of getting there. It took a few tries of people to find a nice parent who lives close by to where I was staying to pick me up. The co-organizer gave me a copy of his tactics book; in return I gave him a Premier Chess pen, which was purchased by NG Slater Corporation.
Unlike any tournament in the United States where participants need to run out for food in between rounds, we enjoyed a smorgasbord of vegetables, hummus, tahini, pizza, cookies and more. There was also an unlimited supply of coffee and tea to keep our engines running.
Of course, what was most different about this tournament than any other one I’ve ever played in was the exorbitant amount of games! We began at 10:00 AM and did not finish until around 9:00 PM. We didn’t have any breaks except for a 20-minute pizza break at 4:00 PM.
I started out strong, winning my first three games. I then drew two games and lost two. After that, madness began and I honestly could not keep track! I was one of about a dozen masters playing in the event. The tournament was more about stamina than anything else.

In the second half of the tournament, everyone started looking like zombies. In the 39th round, I literally hung 3 pieces within a span of 4 moves against a “B” player… two moves later she missed a simple “blueprint” checkmate in 2. “Blueprint” is a term coined by the late National Master and Author Bruce Alberston, for checkmating patterns in which a player does a simple maneuver without checks. There were other pieces on the board but you can get the gist of the checkmating pattern here; white checkmates in two moves. 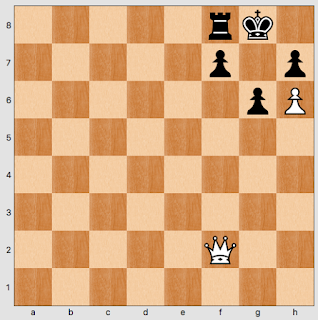 What sets stronger and weaker players the most is the amount of consistency. Obviouslly stronger players will typically win. Statistically a player who is 100 points lower rated then his opponent will score about 25%. In this tournament, those who conserved their energy did the best. In the last six games, Grandmaster Ram Soffer lost three games due to fairly elementary blunders.
In the end of the evening though, Grandmaster Rom Soffer and Valentin Goikn won the tournament.  I tied for 9th place with WFM Michael Lahav.