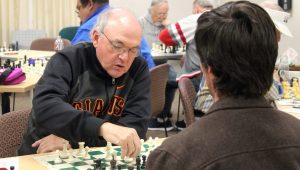 Here is a sampling of famous people who played or influenced chess:

Benjamin Franklin (1706-1790) – The American founding father and Renaissance man was also an avid chess player.  He is the first American known to have written a book on chess.  “Morals on Chess” was published posthumously in 1796.  In 1999 he was inducted into the US Chess Hall of Fame. 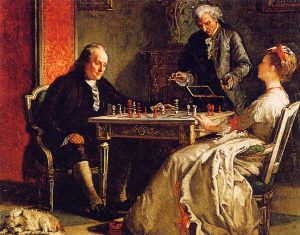 Napoleon Bonaparte, Emperor of France (1769-1821) – Napoleon is reported to have been an enthusiastic, though weak player.  Four games allegedly played by him are known, but the authenticity of them has never been established.

The game was played on St. Helena, where Napoleon was exiled after the Battle of Waterloo.  His opponent, General Bertrand was another exile.

[If he gets his queen back into the game, he is no worse than even. 13… Qxe5 14. Bb2 Qg5 Black’s lack of development is a serious problem, but with an advantage of an exchange and two pawns, he has the better game]

Marcel Duchamp (1887-1968) – The world famous French painter was also a strong chess player.  He was good enough to represent France in the Chess Olympiad of 1928.

He sometimes featured chess in his art as in this work titled, “Portrait of Chess Players”: 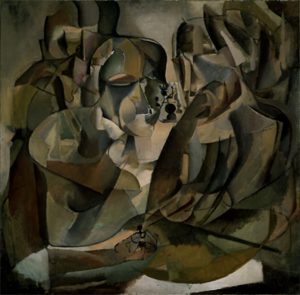 Humphrey Bogart (1899-1957)– The famed American actor was also a strong chess player.  He was purported to be an expert strength player, though he never played in tournaments.  He always had a chess set with him when filming.  Remember the scene in Rick’s Café  from “Casablanca“?

John Wayne (1907-1979) – Every true fan of the Hollywood actor knows that John also happened to be a huge chess lover.  In fact, according to fellow chess nuts, John was a fairly good chess player at that.  He was known to carry a miniature chess board along with him on set to play a few games with co-stars in between filming scenes.  Wayne played chess with a number of well-known celebrities including Marlene Dietrich, Rock Hudson, and Robert Mitchum.

Jacqueline (1911-2012) and Gregor Piatagorski (1903-1976) – Gregor was a Russian born American cellist.  His wife, Jacqueline, was a strong chess player and regular participant in the U.S. Women’s Chess Championship.  Together they sponsored several major chess tournaments in the late 1950’s and 1960’s.  Two of the strongest tournaments ever held on American soil were the First Piatagorski Cup in 1963, where Paul Keres and Tigran Petrossian, both of the Soviet Union, tied for first and the Second Piatagorski Cup in 1966, where Boris Spassky barely beat out Bobby Fischer for first.

Here is Jacqueline Piatagorski playing in a chess tournament in 1951 in a French Defense, Tarrasch Variation: 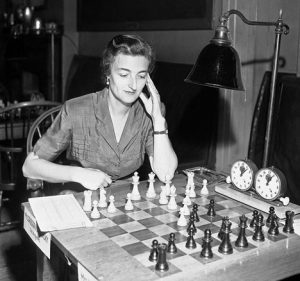 Claude E. Shannon (1916-2001) – Shannon, an American mathematician, was one of the pioneers in the development of computer technology.  He was a code breaker during World War II.  Though he was an amateur chess player, he is best known in the chess world for coming up with the first design for a chess program.  He never wrote a chess program himself, though virtually all computer chess programs use the design he spelled out in “Programming a Computer for Playing Chess,” published in 1950, including my own program, Friedliver.

Henry Kissinger (1923-) – Kissinger, the National Security Advisor and Secretary of State in the Nixon administration is best known in the chess world for a phone call that changed chess history.  At a point in the negotiations between Fischer and Spassky for their World Championship match in 1972, when it seemed that Fischer’s demands would scuttle the match, Kissinger called Fischer and talked him into playing.  The rest is history.

Walter Tevis (1928-1984) – Was an American novelist and short story writer. His best known novels were “The Hustler,” “The Color of Money,” and “The Man Who Fell to Earth,” all of which were made into movies.   He was also an avid chess player and wrote the novel, “The Queen’s Gambit,” about a child prodigy.  “The Queen’s Gambit” was made into an acclaimed TV series on Netflix in 2020.

Bobby Darin (1936-1973) – The American singer and songwriter was an enthusiastic chess player.  He is best known in the chess world for something that didn’t happen.  In the wake of Bobby Fischer’s rise to World Chess Champion, Darin set out to sponsor a Grandmaster chess tournament.  Unfortunately the event was cancelled after his premature death.

Dr. Charles Krauthammer (1950-2018) – If you watch Fox News, you know who Krauthammer was – a commentator and regular guest on many of their shows.  He enjoyed a good game of chess and frequently used chess analogies in his commentary.  He played in the 2002 Atlantic Open in Washington, D.C., but the only time I saw him in person was at a simultaneous exhibition, March 20, 1986, on Capitol Hill against GM Lev Alburt.  I don’t know how Charles fared, but I drew my game. 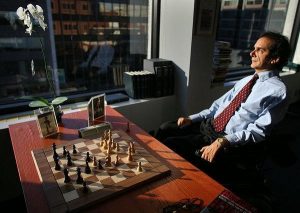 Sting (1951-) – “Sting” is the stage name of Gordon Matthew Sumner, lead singer of the band, The Police.  In 2000 his interest in chess inspired him to invite Gary Kasparov to play a simultaneous exhibition against The Police.  The exhibition took place on ABC’s “Good Morning America.” Needless to say, Kasparov was neither stung nor impressed. 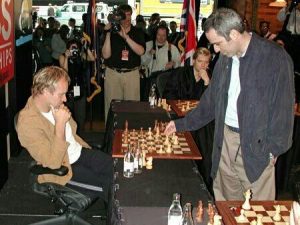