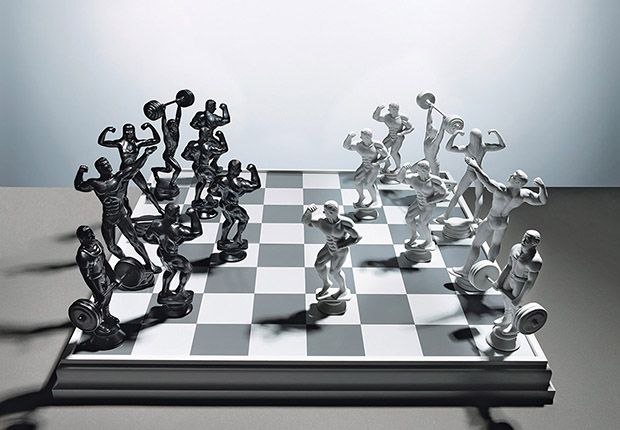 While riding an exercise bike at Atomic Total Fitness, my trainer Mike Murray was training me how to alternative between some intervals where I’d sprint and others where I’d take “active rest”. Naturally as a chess player, I overanalyzed his guidance to determine the rational of the paradox. By slowing down but continuing to pedal, one could keep exercising but conserve some energy. Likewise, one can lay down or solve 100 chess tactics; both are equally physically relaxing but one’s brain will be fried after the latter. When playing chess, it’s important to dedicate 100% of your energy to the game itself. My coach Grandmaster Leonid Yudasin used to frequently tell me to avoid playing tournaments when I had too many external factors on my mind- an upcoming test, trip, girl I had a crush on, etc.

How does one allocate that 100% of energy through out the game? A player needs to budget his time like he does with money. Two years ago, while I was helping Jonathan Corbblah coach his Trinity and PS 166 students at the New York State Championships in Saratoga, I was starting to get disappointed due to every chess coach’s nightmare- when all students run back to the team room 5-10 minutes after the round as they already finished their games. I’d ask most of them how much time they had left and they would say 50 or 55 minutes, when the time control was G/60 (60 minutes per player). Jonathan and I repeated to the students that that they should slow down but round after round, they would consistently rush their moves and finish their games way too quickly.

Soon, I realized as coaches, we needed to be more concrete with our instructions and teach them a decent way to manage their time. The average chess game is around 40 moves. Therefore, students should spend about 1.5 minutes on each move. If one is playing a tournament that is G/120, he should budget around 3 minutes per move.

To the contrary, this idea of dividing the time control by 40 should be used only as a guideline. In general, one should not make a move in under the per-move timeframe. While I tell students to even spend this amount of time on the opening moves, to get them in the habit of doing so, few top players will spend that much time on variations that they’ve played hundreds of times before. That said, some top players will- look at Grandmaster Alexander Ivanov. While he has played the Modern Defense several hundred times or more, you will often see him go into a 10 move think on move 1, 2 or 3. I once asked him why he thought so long in the first few moves. He then explained, while he does know the theory well, he usually wants to relax, gain composure, devote his energy to the game and try and remember any opening preparation that he may have forgotten.

We all know that one blunder can ruin a whole chess game. Therefore it is important to continuously focus just as Mike wanted to remain pedaling, even if more slowly than at other junctures. Each move one should follow a thought process, as outlined in my recent US Chess article.  However, one must differentiate critical positions, where there a lot of complications, e.g material imbalances, attacks threats, etc. In these positions, where the evaluation could easily swing by several points, it is important to spend as much as time as you need to come up with the best concrete solution.

As the MTA  says, you must always remain alert and “If you see something, say something.” Whether it be fitness training, playing a chess game, or running a business, its important to take breaks and relax but one should never put his feet on the brake entirely. As the Allman Brothers say, “The road goes on forever”!