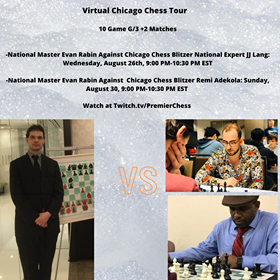 On Wednesday night, I defeated the infamous Chicago Chess Blitzer JJ Lang in a 10 game 3-2 match on Lichess.org.

JJ splits his time between studying as a Stanford PHD student, rapidly improving in chess and teaching. You can learn more about him on this Perpetual Podcast episode. Stay posted for his upcoming appearance on our podcast.

I had some decent opening preparation for the match, guessing he would play the Nadjorf; however, the lines I organized were not deep enough. I had no idea as to whether he would play 1.d4 or 1.e4 as he played lots of games with both starting moves recently.

In the first game of the match, he played 1.e4 and I played my pet 3…c5 in the Caro Kann advanced variation. As I saw in a previous game, he played 4. Nf3 which is less common than the typical 4. dxc5. I ended up developing a strong attack but blew it away with 21…fxe5, which gave white lots of counterplay. Eventually I lost in a topsy-turvy endgame.

We then had our first Nadjorf of the night, when I did develop a strong attack and advantage but JJ escaped with a draw.

In game 3, he just straight up utterly destroyed me:

At this point, I definitely wasn’t feeling optimistic about the match as I started .5/3.  If there is one thing I learned through from playing lots of matches and 936+ tournaments, is that one  of the most important assets of a strong chess player is the ability to keep his cool after a mistake within a game or a loss. I can’t tell you the amount of times I would make one mistake in a game, blowing away my advantage to get an equal position, making another to get a worse position and shortly thereafter, blundering to lose.

Similarly, I will never forget my tragic 2005 World Open experience.  As an expert at the time, I was excited that I accidentally dropped below 2000 and was able to play in the U-2000 section and play for the ‘big bucks’.  As I didn’t have much planned that summer, I spent the week before with intense chess study, several hours a day. I remember my friend and study partner Rob Garcia repeatedly told me that week to just relax and play decent chess and I would do fine but I ended up overwhelming myself. In the first game, I did OK and won. In the second round, my friend Robert Guevera showed messed up with the round time and showed up to the round with 2 minutes and no time delay! You would think I would just make normal moves and flag him but shore enough I got so excited and hung my queen. Even then I had some chances as he was so low on time and he ended up winning a heartbreaking game. Had I kept my cool afterwards, I would have plenty of time to recuperate and win money in the 9 round event, but at the time, a lost to me had a domino effect… before I knew it I was 2/8 and withdrew before the last round. This time around the block with JJ was different though……..

It definitely wasn’t due to some mistakes (on both sides), but I ended up going 5-0 in the second half and won the match! See all the games of the match here.

Do not miss out on the action as I take on Chicago Chess Blitzer Remi Adekola in my second 2020 Chicago Chess tour match. Here is some footage of Remi and I playing some Skittles at the 2018 World Open.

This time of course, the match will be virtual; those who watch the live commentary and music on our Twitch stream  and email evan@premierchess.com with their address will get complimentary Premier Chess custom masks.