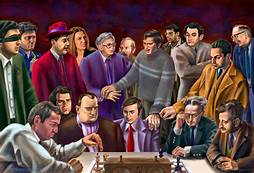 This game was played in the semi-final of the USSR championship in 1948.  Spassky was a 14 year old wunderkind destined to win the World Chess Championship from Petrosian in 1969.  Korchnoi at 19 was also a very strong player and years later would challenge Karpov for the World Championship.  This was the first of 81 games they would eventually play against each other in competition.

6… Bg4!? Unusual in the present day, but the theory of the Dragon Sicilian was not well developed at this time.

8… Qxd7?! The trouble with this move is that it leaves the bishop with no good retreat.

Bobby Fischer, though only 17, had already been U.S. Chess Champion for three years and a World Champion Candidate when he travelled to Buenos Aires to play in this tournament.  His opponent, Wolfgang Unzicker, was one of the leading players from West Germany.  Fischer uncharacteristically loses his way in the opening and never gets on track.

10… Nc6 11. Nxc6 bxc6 12. Qg3 h5? Apparently Fischer played this to secure g4 for his knight.  Whatever he hoped to gain by playing this is not worth the weakening of his king side.

Back in the good old days there was a National Chess League.  The team from Washington, D.C. was the Washington Plumbers.  I was at their site one evening watching one of their matches.  After the games were over, one of the players on the Washington team, International Master Eugene Meyer, was playing over his game from the match and taking questions from the audience.

After one of his moves someone asked, “Why did you play that move?”  Indeed, from my point of view the move did not have a point.

Meyer replied, “Because it defends the knight.”

“But there is nothing attacking the knight.”

“True, but even when not attacked, the more pieces you have undefended, the more likely it is that something bad will happen.”

Profound!  I had never thought of that!

Perhaps Karpov should have been at that Washington Plumbers match.

At the time former World Chess Champion, Anatoly Karpov, lost the game below, it caused a sensation.  How could the second best player in the world (after World Champion Gary Kasparov) play such a simple blunder in a simple position?  Karpov’s opponent, Larry Christiansen had been U.S. Champion in 1980 and 1983.

11… Bd6?? This move is hard to fathom.  Not only is there the positional objection that it blocks his d-pawn, but more important, it leaves the both the bishop and the knight undefended and exposed.  Furthermore the refutation is ridiculously simple.

[My best guess is that Karpov intended to keep following the normal line and simply got the move order mixed up. 11… Qb8 A few months EARLIER Karpov played this move against Christopher Lutz and won. 12. O-O-O Bd6  +0.27|d17 Rybka4 Again, these are not the kind of moves I would play, but what do I know?]