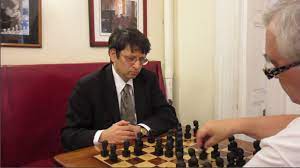 Last week we lost one of the most enthusiastic chess players who ever exsisted, National Expert Scott Chaiet. A few weeks before the COVID-19 Pandemic began I was analyzing a game with Scott, our mutual friend Fedor Khrapatin and a few others late at night after a round of the United States Amateur Team East in Parsippany.

He was so estatic about the game that I felt like he was sports commentator. He had a true passion for identiying beautiful combinations, art on the chess board.

Scott worked as an engineer for the Metropolitan Transit Authority for many years and recently retired. Over for the last few, he often told me he would soon retire and work part-time for Premier Chess. I told him “just tell me when and you will be hired.” Unfortunately, before he could do so, he shockingly had a heart attack and stroke and passed a few weeks later.

In addition to chess, Scott and I bonded over our common passion for torah study. Neither of us grew up wth observant Jewish families, who kept Shabbat or Kashrut. However, as adults, we both decided that we wanted to learn torah, Jewish laws, holidays, etc. in more detail. At the funeral, his rabbi spoke about how he started regularly going to morning services at the synagogue and asked to learn torah. It was due to him that the synagogue started offering a weekly class on Pirkei Avot, the Ethics of Our Fathers. Likewise, I learn a lot from many of mentors, including Rabbi Mark Wildes, Founder of Manhattan Jewish Experience, Rabbi Levi Welton and Rabbi Mendy Brukirer, Director of Outreach at Meor Manhattan.

Rabbi Levi Welton taught me how the Lubavitcher Rebbe compared a Jew to a pawn in chess.

A Jew naturally is of a lower status than Angels. However, when a Jew prays, he could rise his status above them. While a pawn is the lowest value piece (1 point), it could promote to a queen (9 points), above a bishop, or knight (3 points) or a rook (5 points). Scott was a certainly a pawn who promoted himself to live in heaven. While his body is no longer with us, his soul will live forever. Come celebrate his life in a memorial tournament on September 11, organized by Tyrell Harriott.

6 thoughts on “A Tribute to Scott Chaiet, Chess Teacher and Torah Student”