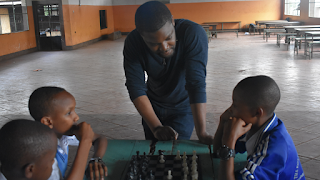 The top three finishers will receive Amazon Gift Cards, while fourth to seventh place finishers will receive gift certificates to American Chess Equipment, one of our partners that provide the highest quality of Chess Equipment. Additionally, trophies will be handed out to the top 25% of participants, and medals will be given out to all participants with 2.5 points or more that do not win a trophy.

Without further ado, the following is a breakdown of the Grand Prix thus far:
In our first tournament, Sylvie Vanderbilt of PS 58 and Darvin Lee of PS 124 tied for first place. Aarav Roy of JCGS and Soren Maholtra of OLP came in second, with Luke Luo of PS 50 and Justin Lee of PS 124 in third.

As such, the following are the standings for the Grand Prix thus far:

We can’t wait to see the turnout for the final event in the Grand Prix series! Please contact Premier Chess CEO Evan Rabin at evan@premierchess.com or (917) 776-1306 with questions.
From playing chess, I have learned two practices that I use in my working life—teamwork and the act of strategizing.
In chess, each player has 16 pieces to work with. A chess player learns how to use a “team” of pieces to accomplish the task at hand—get to checkmate.
In politics and local government, teamwork is essential to accomplish tasks. To build a road, for example, requires coordination of several groups—the transportation department, water department, electric and/or gas company, and more. If one were to view each department as a chess piece, someone needs to coordinate the workings of each piece. As mayor, I orchestrate teams of people to complete projects.
In chess, each piece has its own way of working. The rook, for example, only moves horizontally and vertically.  The pawn can move forward but not backward. This knowledge plays a part in a chess player’s strategy of how to maneuver the pieces to win.
Knowing how to strategize is very effective in politics and local government. To pass an ordinance, for example, requires the approval from the City Council. To get approval, the information needs to be presented in a way that’s understandable to the Council. Having the knowledge of each Council member’s perspective—similar to knowledge of how a chess piece moves—is necessary to move items forward on the Council’s agenda.  We don’t declare checkmate in our proceedings, but a win is just as gratifying.
Mayor Rothschild is a native Tucsonan. His grandmother moved to Tucson in 1942 and opened a used furniture store, Valley Fair, on South 6th Avenue.
He is a graduate of Canyon del Oro High School, Kenyon College and the University of New Mexico Law School. After serving as a law clerk for District Court Judge Alfredo C. Marquez, he went on to a 30-year career practicing law with the firm of Mesch, Clark and Rothschild. He served as managing partner for the firm and concentrated his practice in the areas of business law and estate planning.
The mayor has a long history of service with many nonprofits in the community and served as Board President for Casa de los Niños, Handmaker Services for the Aging and Temple Emanu-el. He is married, with three children and two grandchildren.

Meditation is the basic human ability to be fully present, aware of where we are and what we are doing, and not overly reactive or overwhelmed by what’s going on around us.

This practice is an effective way to connect mind & body while improving attention and self-awareness, which promotes a healthier and happier life. It can be done by anyone, of any age, regardless of his or her practice level, so that a state of calm and relaxation may be achieved.

Therefore, meditation is one of the best ways to enhance mind and brain abilities. With a calm, relaxed and focused mind one can stay in the moment rather than worried about results.

Business and Finance event at UBS!

The1st Annual Grace Church and Brooklyn Friends Grand Prix Tournament #6 will be taking place on June 2nd. I know it’s in the following month but these short summer days are flying by, you are gonna one mark this one down on your calendar. Special thanks to the Make A Difference foundation who has helped to plan and organize this event, and through a silent auction, will teach chess to underprivileged youth in Africa. Email evan@premierchess.com if you can donate a silent auction item.

For all of you interested in helping youth have you ever heard of Metro World Child? A non-profit organization devoted to helping at-risk youth worldwide, and is based here in Brooklyn, New York! Believe it or not, Metro World Child has been around for nearly half a century!  On June 9th, Premier Chess will be holding a fundraiser Grand Prix Chess Tournament hosted by the organization Metro World Child. To become a part of this event you can register Register here. If you have any questions, please contact Premier Chess CEO Evan Rabin at evan@premierchess.com or Glisson  Niekerk at gniekerk@metroworldchild.org. Hope to see you all there and looking forward to paving a brighter future.